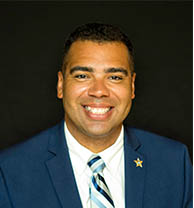 Ricky Butler is the Community Programs Manager for the Pinellas County Sheriff’s Office where he oversees public education programs and special events. Prior to his role as Community Program Manager, Ricky worked as a Public Information Specialist in the External/Legislative Affairs section where he managed agency social media and assisted in developing content for various agency communication platforms. Before joining the Pinellas County Sheriff’s Office in 2013, Ricky worked on various political campaigns including Sheriff Bob Gualtieri’s 2012 campaign and Senator Jack Latvala’s 2010 campaign.

Ricky is a graduate of the Leadership Pinellas Class of 2015 and is the incoming 2017-18 Program Chair. Ricky’s past committee assignments include Criminal Justice, Government & Infrastructure and Tallahassee.

As a Pinellas County native, Ricky is passionate about his community and serves on the Board of Directors for the Boys & Girls Clubs of the Suncoast, Pinellas PACE Center for Girls and the Sheriff’s Police Athletic League (PAL). Ricky is a member of the Clearwater Jazz Holiday “Jazz Force” where he oversees Education during the popular, four-day music festival. Other organizations Ricky is affiliated with include Celebrate Pinellas Park, Inc. and the Pinellas Park Kiwanis Club.

Ricky and his wife, Jessica reside in Pinellas Park. He is an avid bourbon enthusiast and in his spare time enjoys politics, adventure, riding motorcycles, gaming, photography, and social media.