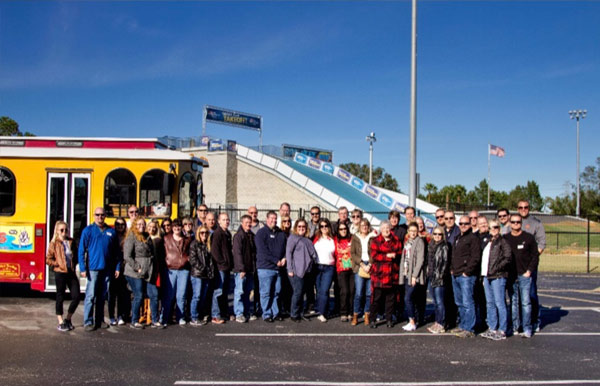 As my fellow ’18 classmate Randy Swallows climbed the pole of death, it looked like something he was born to do. Even with the safety gear and helmet on, he looked like Batman, and without hesitation and not a hint of fear, he jumped off from 25 feet in the air.

Before the guide at Empower Adventures Tampa Bay could tighten the guideline attached to Mr. Swallows’ waist, he plummeted from the sky reaching for a target tied to a rope and then fell backward to his death.

Okay, not really. He was clipped into a safety line and it caught him and slowly lowered him to the ground. Mr. Swallows would go on to repeat similar acts multiple times. I was so inspired by his heroics that I opted to not even try. It was for that reason and not because I was completely terrified, of course. Terror may have played a small part though, I admit.

“We’re all about letting people push themselves as far as they want to go,” said Joe DeRing ’17, president of Empower Tampa Bay and formerly an eight-year veteran of the US Army where he served as a combat officer.

Admitting to Mr. DeRing that I was too terrified to try the pole of death seemed like a bad idea, he was pretty authoritative but in a quiet way. But he summed it up as simply as he could when he said that people have to challenge themselves and the other people around them to grow. That’s what it comes down to.

That same mantra could be repeated as the entire underlying theme of Environment and Tourism Day for the Class of ’18. Through strategies and processes, we learned that our country has come to see Environment and Tourism as inextricably linked. Making our tourism more friendly to the environment and even building some offerings completely on our unique habitats and preserves, leads to more tourism dollars and more prestige.

We started this journey on one of the coldest days of the year. The class met up in the Spectrum Field parking lot around 7 a.m. with only one member seen running to catch the bus. But this time it was more than a bus, it was a total upgrade to the renowned and unmistakable Jolly Trolley.

Rosemary Windsor ’16, CEO of the Clearwater Jolly Trolley and Co-Chair of the Environment and Tourism Program Day, gave the Class of ’18 all the details of the Trolley, including its history and expansion over the years, as we rode to our first destination. Several of us are already planning pub crawls using the Trolley’s charter services.

At the Sand Pearl on Clearwater Beach, the Class of ’18 received an up-close view of the first resort in Florida to be LEED (Leadership in Energy and Environmental Design) Certified. General manager Erik Waltz told us that the Sand Pearl was at the forefront of going green and has been rewarded with extensive growth and continued guest loyalty over the last seven years.

Brian Grant, director of engineering at the Sand Pearl, explained how the building uses geothermal heating for the pool and utilizes systems that capture and reuse energy from wastewater to exhaust air leaving the facility.

We also had a quick but amazing tour of the private beach access as well as an expansive gulf-facing suite.

That Gulf of Mexico view, beautiful from the 6th floor of the Sand Pearl, is where a fisherman found Winter the dolphin back in December of 2005. The Class of ’18 got to see the star, easily the county’s biggest celebrity, in person (er, in-dolphin?) at the Clearwater Marine Aquarium.

This stop was extra special in that it included an appearance from both Hope and Winter as well as an overview of what the movie making business was like from David Yates, Chief Executive Officer of the aquarium and someone intimately involved in both productions, Dolphin Tale and Dolphin Tale 2.

Mr. Yates talked about making the movies and the touching interactions with people young and old who see something of their own life’s story in Winter’s.

The trip to the aquarium was followed by a full immersion into all things Dunedin. The first stop along the way was that hallowed ground that is Florida Auto Exchange Stadium. To hear Mayor Julie Ward Bujalski ’09 tell it, this baseball field isn’t just a spring home to the Toronto Blue Jays, it has been a key component to Dunedin’s growth as a city. That’s exactly why they’re planning a massive expansion and upgrade in the near future.

At the Dunedin Brewery, the Class of ’18 saw one of the birthplaces of the local craft beer movement. As we sampled apricot ale, we heard from owner Michael Bryant about the beer culture that’s grown in Dunedin and started with his brewery many years ago.

Baseball, Beer and Beaches, that’s Dunedin’s calling card and that made the last stop in the city the best. Honeymoon Island State Park in all its beauty and wonder proved captivating even if the cold made it so we couldn’t feel our faces.

Peter Krulder, park manager at Honeymoon and two other state parks in our county, reminded us how truly lucky we are to have these resources in our backyard. The beach at Honeymoon Island receives more than one million visitors a year, he said. Many of them coming from other places just to catch a glimpse of the beauty that is ours to enjoy year-round.

During lunch at Thirsty Marlin, the class heard from Visit St. Pete/Clearwater Community Relations Manager Kristin Coryn about the organization’s efforts to spread the word about our area’s unique offerings to tourists from across the country and the globe.

Even with Florida being a destination for everyone, she said, the research shows that Orlando is the biggest supplier of visitors to our county, followed by New York.

Attracting visitors is something the city of Oldsmar has gotten fairly good at in the last few years. Oldsmar has in the past been considered a city that didn’t have an identity inside Pinellas County because it straddles the Bay and borders Hillsborough. But in recent years, Oldsmar has come into its own as a world-class extreme sports destination drawing people from everywhere.

The Class of ’18 learned how the BMX at Oldsmar Sports Complex originated from community leaders like Oldsmar City Councilman for Seat 1 and member of the Class of ’18 Eric Seidel and Felicia Donnelly ’05, director of leisure services for the city. They explained how the facility was unique to the entire sport of BMX racing with its insanely steep ramps and gut-wrenching jumps. Councilman Seidel was able to speak with experience in telling the class how fast the track actually was, having been a part of the inaugural ride when the ribbon was cut on Oct. 15, 2015.

Tired from a long day of delicious food, beer samples, and amazing experiences and conversations, the idea that just a few minutes’ ride away terror lurked could not have been further from my mind.

At Empower Adventures Tampa Bay, it started innocently enough as we learned about the complex, who it serves and what its mission is from Mr. DeRing. Then we split into groups. One group went zip-lining, which seemed pretty neat and not that terrifying. Another did team building … on the ground. And last, there was a team doing the pole of death. For some reason, I volunteered to do this, and while Mr. Swallows and several of my other classmates were able to climb the 25-foot death trap and plunge from it with no problem, I decided early on there was no way in hell they were getting me on that thing.

To their credit, Mr. DeRing and the team at Empower were pretty cool about it. They didn’t even make fun of my cowardice.

I have a feeling my classmates may not be as forgiving.